About Noctis Gaming:
We are a new company launching our first Kickstarter in early June 2019. Drakenheim is a 20mm scale, fantasy tabletop wargame and we will be looking to fund the first four factions of the game as well as accessories and terrain.

About Drakenheim:
Drakenheim is a 20mm tabletop wargame set in a fantasy world called Mythrandris. We have created the game to be scalable from small skirmish size all the way up to siege size of 1000 or more models.

Rules
The rules have been designed to be realistic, tactical, proactive and reactive as well as being, most importantly, fun. The hardest part of our development has been to create a game that can be played in large scale in a reasonable timescale. In this, we believe we have been successful - a large game of around 800 models can be played in a few hours once you are comfortable with the rules.

The game is simple to grasp but allows for complex tactics due to the proactive and reactive decisions that players will face every turn. For example, when targeted by an enemy units ranged attacks, you may choose to increase your units defence by creating a shield wall - however this decision will mean the defending unit will have to move slower in the proceeding momentum phase. It is this range of cause and effect decisions that really separates Drakenheim from others on the market and creates a realistic, cinematic and thrilling experience.

The core rules and unit rules will be free to download so when updates are made players can update their publications with no cost. All core and faction rules will stay free forever.

Miniatures:
The aim of Drakenheim is to bring large scale fantasy battles to an ordinary tabletop. To do this we had to adopt a smaller scale for our miniatures without compromising the quality of the product. We settled on 20mm as our scale as we felt this had the perfect balance of scale and detail. We don’t want these large armies to be daunting to paint so we have designed each faction to have areas of block detail for ease of painting. The miniatures are designed so that people who want to paint them quickly can do so, but also so that people who like a painting challenge can still get some incredible results. We will be showing some painted prototypes off over the next few weeks - painted by artists with a range of capabilities.

Lets take a look at two of the starting races:
The Corustir are a Roman/Greek/High Elf fusion and are one of the more organised and martial races in Mythrandris. This image is of a standard female warrior, however both genders fight in a Corustir army. 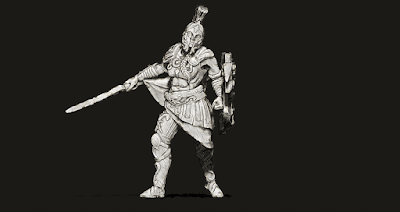 This is a Drek warrior with 2 hand axes. 'Drek' is a derogatory term dating back to the days when orcs were farmed as slaves and forced to work in mines. They stand taller than an elf or human - who will only come to the height of their shoulder. 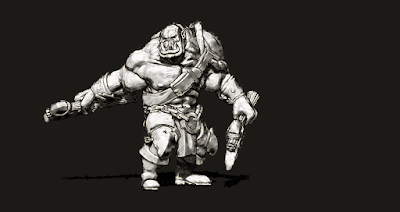 Here is a little battle scene using some of our renders. 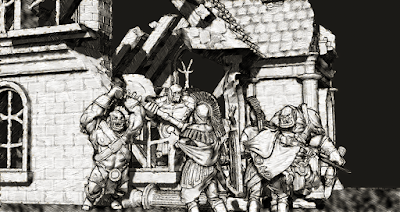 We will be offering a variety of faction models as 32mm skirmish scale too. See the Kickstarter for details!

Terrain:
To go with our miniatures, we are developing a range of terrain for each of our factions. From ramshackle huts and tents for the Bhur to the Roman/Greek/Elf fusion we have developed for the Corustir, our aim is to give each society its own distinct character and range of terrain. We will be producing pre and post battle terrain so that players can revisit locations from their campaigns after a battle has concluded.

Here is a Corustir dwelling suitable for an untouched battlefield: 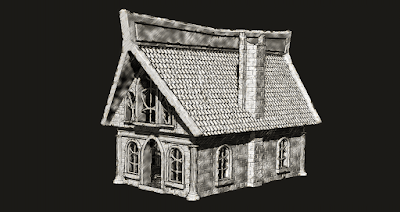 Here is the same dwelling after the battle has been fought (or during if you want an evolving battlefield: 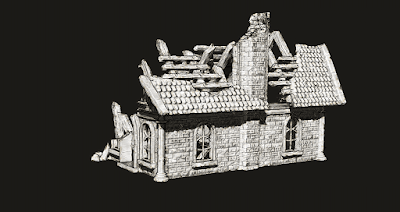 It won’t stop there either! We will sell the rooves individually in case people (like me - Tim) want to have snow and fair weather versions without having to buy full kits.

We also want to develop natural scenery that can be used at any scale - but this may be a little way down the line.

Kickstarter:
We have created a range of pledges to suit all budgets. The cheapest will be an entry point of £75 - which will get the pledger a small army of around 80 miniatures. The best value (per miniature) is the Crusader pledge - which will get the pledger either a Crusade scale army of between 600-800 models or two large armies of between 300-400 models to maybe share with a friend. The Crusader pledge is a premium pledge that will give players the ability to field various large armies to suit any play style.

We have also included 2 types of limited pledge; the Scholar pledge includes an invite to a beta rules seminar in August in which three pledgers from each faction will help develop some of the faction specific traits and special rules for their force! The second limited pledge will award a large army plus the ability to design a custom warlord which will come in on-foot and mounted options with official rules. We hope these will be popular so make sure that you come back regularly to get the confirmed launch date in a week or so.

We are not doing early bird pledges as we feel that they can often be unfair and we are not doing exclusive products for the same reason. We have created a range of pledges that can suit most budgets, all of which have really great discounts. So, instead of early bird pledges we have decided that we will give away freebies in the form of faction specific dice. These will be available to everyone as an add-on but the first 1000 pledgers will get a set (relevant to their pledge size) free.

We hope that you have seen something that interests you in our project. Feel free to send us an email at noctisgamingltd@gmail.com if you want any information, or you have any ideas. We would also love to hear from any artists or writers who would be interested in helping us expand the setting over the next year.

Check back next week for a full faction focus on the Corustir and an article about how ranged combat works in the game!

Hi all Thanks to everybody who supported or provided feedback on the project. I now realise some errors from the Kickstarter and have canc...